How to set up your phone as a webcam

Zoom has become a household name in the past year. The technology is being used by many offices and businesses to replace face-to-face meetings.

Whilst laptops, computers and tablets have built in cameras, most are fairly low quality. These cameras often lack the technical ones found on most modern smartphones.

Finding a good high quality web cam is a challenge. There is a huge difference in price between all the different makes and models. What’s more, you don’t really know how they are going to look on the call until you buy one.

So why risk picking up another potentially poorer camera when you can use your already very good mobile phone camera for your calls?

The easiest and best way to do this is to download Zoom, Skype or whatever your app of choice is, directly onto your phone. Most of them support and even run a little better than on your slightly ageing computer.

Using a phone as a webcam

If you are looking to replace your built-in webcam with your smartphone’s camera you are going to have to do something a little different.

For Android operating systems there are several applications on the marketplace for connecting your phone to your computer. Some of them use wired connections and others use Wi-Fi to communicate between devices.

There is also some variance depending on if you are using an Android, iPhone, Windows PC or Mac.

Here is a list of our favourite Apps for linking you computer and mobile phone together.

Once you have installed the Epoccam App on your iPhone, you simply need to install drivers on your Mac or PC.

Once the drivers have been installed, you can either have both devices on the same Wi-Fi or connected via USB. You can use either the front or rear camera on your phone. However, the free version of this app only supports 640×480.

The Paid version, which is £7.99, supports HDR. Furthermore, it can use the phone’s flashlight as a light source and unlocks multi-cam options for a more professional set-up.

While this App works on both PC and Windows there is no android support. So, this is only useful if you are on iOS.

While the IV Cam app works on both Android and iPhones, it only works on a PC and the pricing structure alongside the features you get are a little confusing.

The free version is limited to 640×480 and comes with adverts.

The basic version has full support of all ratios and qualities, but has no microphone support and is priced at £7.99 a year.

The premium version is as above, but includes microphone support and costs £9.99 a year.

Finally, the permanent version is £24.99 and is essentially an alternative to the premium version packaged with full support for all image sizes and microphone support.

While it’s one of the cheapest to run for a year (hopefully that’s the longest time you‘ll need this app for) it’s pricing structure is confusing. Furthermore, the free version is severely hampered compared to similar apps. 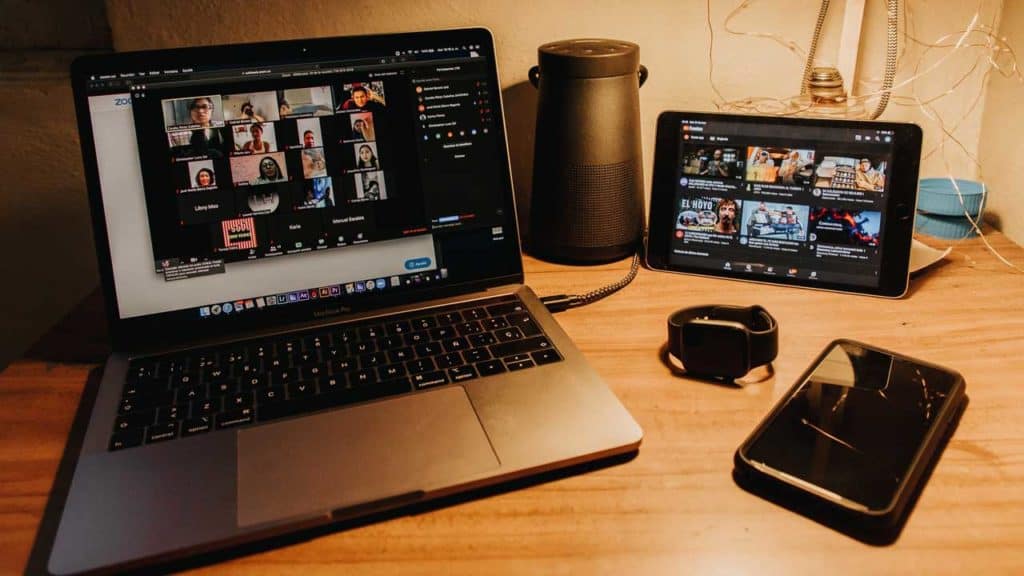 Again supporting both Apple and Android operating systems, but only working with a PC,  NDI HX Camera app requires a download onto your phone and drivers to be installed on your PC.

At £20 this App has full HD support and can give you access to many on-screen tools such as Zoom, Green screen and flash light lighting.

The free version of DroidCam is once again limited to 640×480 resolution and has in-app adverts.

The premium version is priced at £5 and supports up to 720p and provides you with many camera controls such as zoom, camera flip, brightness and contrast controls.

It supports Android and iPhone but only works on Windows and Linux.

It does offer you the choice between a Wi-Fi or wired connection, the latter of which will stop your phone burning though it’s battery.

One of the most unique apps on the list NeuralCam Live only support iPhones and iPads connecting to a Mac device and only works via a wired connection.

However, it does offer a range of unique AI features not seen in any of these other apps. Such as image masking and blurring of obscure content.

Neural Cam is free, with the upgraded version being £4.99 a month or £29.99 a year. The upgrade offers you a range of options. Low light modes, brightness and contrast controls alongside other video editing style masks are all available.

The best apps to help setup phone as webcam overall

There are a plethora of options available to setup phone as webcam. Therefore, we recommend you to choose the best application for your needs. We would advise that when running your phone as a webcam, you leave it plugged in where possible. This will conserve the phone’s battery as these apps will use a lot of power.

Additionally invest in a phone tripod. In this way, you don’t need to balance the handset on the edge of your desk or laptop. This could risk the phone falling and breaking.

If you have broken your iPhone or Android device during a Zoom or Skype meeting then come to We Solve All Norwich for a repair.